This segment includes the Northwest Bar-B-Tour that ended in one of our all-time favorite shows at Brainstains in Portland, our return to Asylum in DC (where it all began) for a full night of music and spoken word where we almost ran out of songs and got Franklin with the old "band stops playing" trick. We also did in studio session at KPSU that got censored (dig around the site to find the priceless MP3 of that) and played the ABC No Rio matinee in NYC for the first time (after many near-misses). 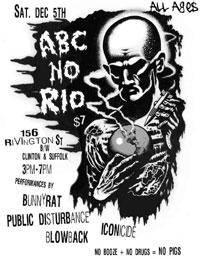 Friday March 10
9PM
BLOWBACK is BACK in DC!

A Night of Music and Spoken Resistance